Letters from the past...

When my Mother died in June 2004 we sold them her house to Pete Wise a 2nd Dan in the YJC it seemed somewhat appropriate. Pete was recently clearing out the loft and found some old paper work. 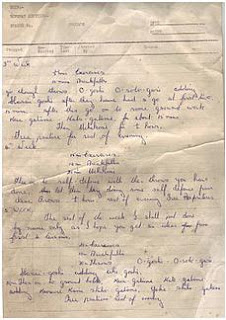 The first piece which I have attached was a lesson plan from Nobby Clarke dated about 1963, although there is no date my father had not become a Professional Judo Coach at that time and it looks as though he scribbled a lesson plan on some works paper. The interesting point is that you could still use the lesson plan today but the most fascinating was that he used part of the lesson as a self defence session using throws as the basis of his techniques.

I cannot remember him doing this but in those days there was very little Jiu Jitsu about so it made sense that he utilised his knowledge of Judo to make inroads into Self Defence. My father was strange in a lot of ways, he would bring new ideas into Judo, once everybody was doing it he just forgot the idea - like self-defence Judo, another was kata. He was the first to introduce kata into Kent, who would have believed that.

He was very inventive in his outlook on Judo as was my mother; she was doing Judo to music back in the 1960’s and laughed at. I learnt a lot from the two of them and when I found pieces of paper like this and look at what I teach and believe in I realise as a youngster I must have absorbed a lot of their knowledge. 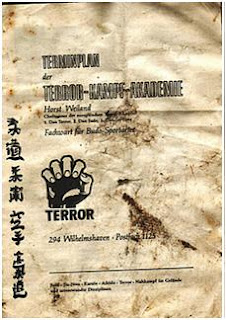 Another piece was the programme on Terror Kampf dated 1968; this was a self defence system from Germany and what I remember of it my mother gained her 1st Dan in this art. From what I remember it was just another form of Jiu Jitsu with one difference: they would wear black gloves. Valerie remembered learning some of this art which she said was mainly using your hands to grab and twist ears, fingers, hair and other body parts to inflict pain. I have looked on YouTube; it is still going but seems to have another name - Anti-Terror Kampf.


The Young Judo club Philosophy when it started was:
“This Young Judo Club is open to all, free from strife, animosity or petty jealousy and functions in the true spirit of Judo.”


To Brag Little to Lose Well
To Crow Gently if in Luck
To Pay Up To Own Up
To Shut Up If Beaten
Are the Virtues of a Sporting Man? 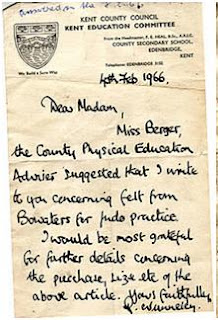 Also found was a letter from a school in Edenbridge asking for details of felt from Bowater’s? Dry felt was used in the making of paper and my father realised that this heavy felt would make the ideal covering for his old feathered mattresses he had when he started the Young Judo Club in 1957.

When schools started doing judo they would use their old gym mats but these would slide all over the place and covering them with felt would keep then together. In those days the old straw filled tatami came from Japan and was expensive. I believe it was Milom who made the first reasonably priced Form Judo Mat with canvas and frame.

For more information on Sambo visit: http://www.britishsombo.co.uk/
Contact Martin Clarke at sombogb@blueyonder.co.uk
Posted by Martial News at 14:59 No comments:

Martin Clarke is the head of the Great Britain Sombo Federation and is an 8th dan Judo, 6th dan Jiu Jitsu and Grand Master CombatSombo and Sambo Wrestling.
He has won in excess of 300 medals in Judo, Sambo, Olympic and Power weightlifting, Jiu-Jitsu and amateur wrestling.
Martin has also represented Great Britain at Judo, Jiu-jitsu and Sambo Wrestling and was a member of the Olympic Judo Squad from 1978 to 1980.

Add blog to our blog directory.